G.T. (George) Lanning, in his teens worked for a milliner near London England, learning the hat-making trade.  As a young man he immigrated to Canada where the first work he could find was with a railroad company as an onboard cook.  Then opportunity brought him to Toronto at the turn of the century where he worked as an agent selling real estate.

In 1915, when the war broke out in Europe, business’ of all sorts turned downward, especially property values and real estate sales. It so happened that “G.T.” had loaned funds to a man to buy a building in downtown Toronto in the years prior to the war, and had taken a chattel mortgage on the equipment of the business to secure his investment. Of course, you can guess the rest of the story, the equipment that secured his investment, were the same hat making tools that G.T. had become familiar with as an apprentice hat maker in England.

It was a small shop at first, mostly reconditioning men’s valuable fur-felt fedoras, top hats, and bowlers.  Often the prized possession was delivered to him by the owner’s chauffeur, while the owner himself toiled on Bay Street. The hat would be reconditioned and ready for the return trip home.

As time went by G.T. was able to buy additional equipment necessary to begin more serious production of various hat styles.  With production outgrowing the downtown Toronto establishment, and the rents becoming too high for manufacturing business', in 1949 it was decided to look for a new location in a town that would welcome a new employer. Moving out, made space for the notorious restaurant called “The Boiler –Room”, gaining its name from the steam boilers used in processing the hats.  Today the “Boiler Room” restaurant is gone along with those buildings from the nineteenth century, and Commerce Court stands in their place.

Bob Lanning, second generation, joined the company after being discharge from the Royal Canadian Navy following WWII, and in 1949 assisted G.T. in selecting a new home for the business.  After reviewing many locations it was decided that Belleville had the right building and readily available labour.  The new building was 3 stories and about 35,000 sq.ft. and quickly filled with personnel making all types of hats and leather goods.

Today, David Lanning, third generation runs the business, located in the same building in Belleville.  Over the years Lanning Hat has delivered many types of headwear including imported hats from Europe and Asia as well as continuing to deliver its own “made in Canada” selection.  Today “made in Canada” is the primary product with over ninety percent of our sales generated by product made in the Belleville plant.

The small but dedicated family of staff at Lanning Headwear, combined have hundreds of years of hat making experience, and further centuries of experience in the garment industry. 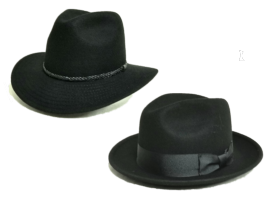 factory to your head.

email and we'll refer you to our retail partners.

Available for direct consumer purchase, for the first time!

Proudly made in Canada!

Payment by VISA or MASTERCARD